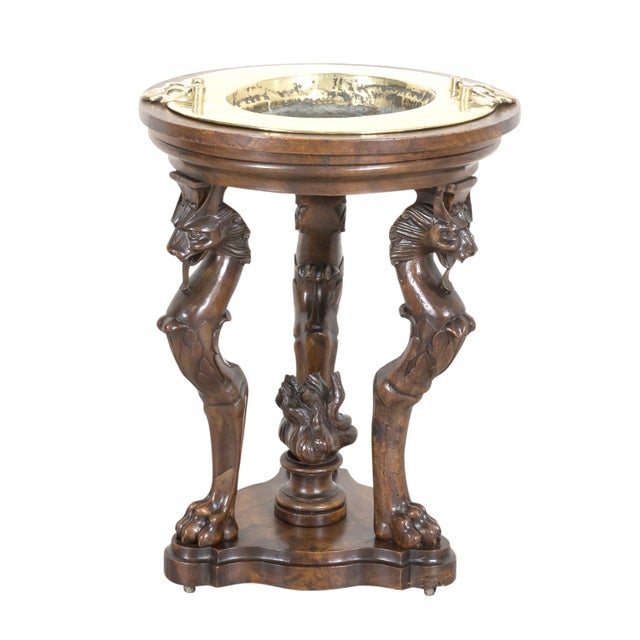 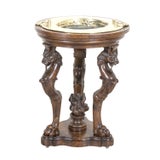 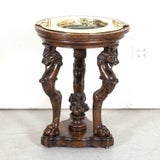 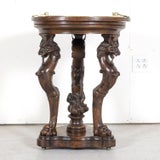 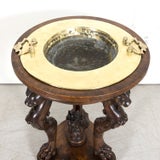 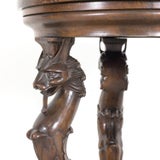 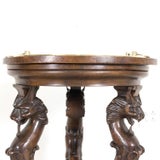 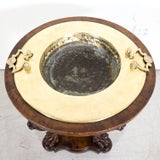 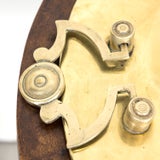 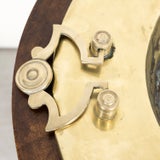 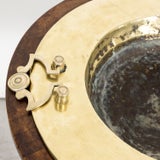 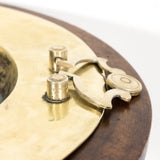 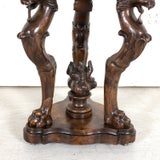 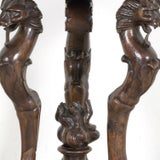 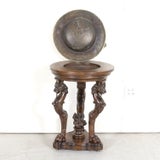 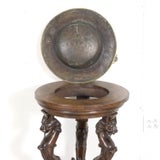 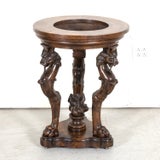 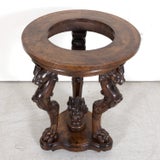 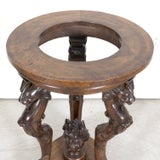 SKU: LOPA111
$4,800.00
$4,800.00
Unavailable
per item
A very fine early 19th century French Restauration period tripod brazier or hand warmer handcrafted of walnut by skilled artisans in Lyon, circa 1820s. This elegant round table features a circular top having the original removable twin handled brass brazier that rests on three hand carved lion head supports with the mouths open baring teeth and emerging from striking palmettes above slightly curved legs ending in richly carved paw feet. A carved flambeau rises from the center of the curved triangular shaped serpentine stepped base on casters. Braziers (known as braseros in Spain) were originally used to heat areas of a home by holding burning picón or hot coals in their concave bowls. This intricately carved brazier with its rich, aged patina is a rare and unusual decorative find that was made for a wealthy family to help heat their chateau and can be easily moved from room to room or outside on a cold evening. Today, this table could also be used as a plant stand, a bar cart to keep drinks cold, or simply a catch all vide poche side or end table.

Charles X, also known as the comte d'Artois (Count of Artois), was the last of the true Bourbon kings. Succeeding his two brothers Louis XVI and Louis XVIII to become the King of France in 1824, he sought to revive the culture of Louis XVI's monarchy. During his reign, French furniture transitioned from overly ornate, bold, and geometric to more comfortable and simple, while still maintaining sophistication. The Restauration period (1815-1830) was a reaction to the pomp and grandeur of the Empire period. Napoleon’s undoing coincided with the Industrial Revolution and new processes in furniture making. The aristocracy and royalty desired to recapture the comforts and refinement of their former lifestyles. This, combined with an increasingly prosperous middle class, brought about a greater demand for furniture. The Restauration continued in the Neoclassical tradition, however, and can be seen as a refinement of the Empire style. Smaller sized pieces of furniture were made with three-legged or tripod tables being important items of early nineteenth century French furniture.
Dimensions:
h - 31.5 "
diameter - 23.5"