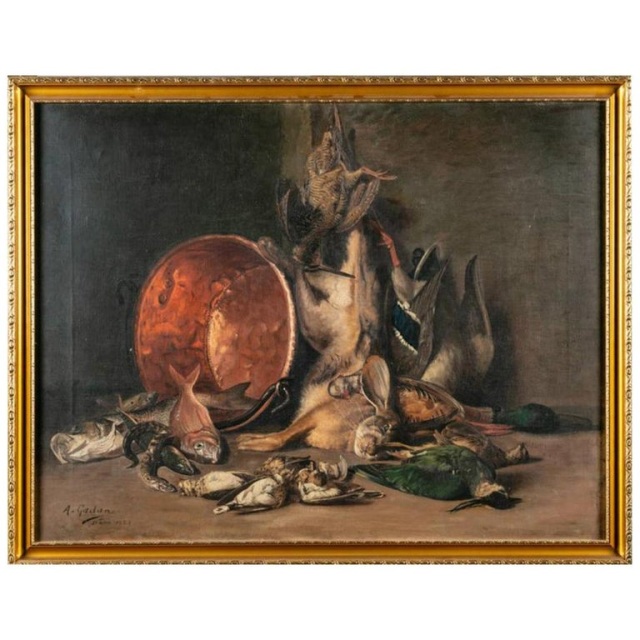 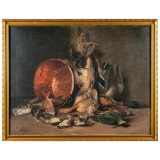 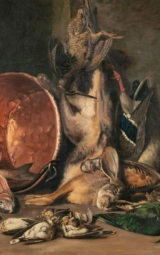 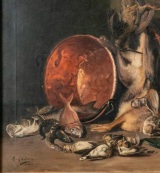 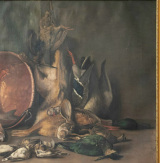 SKU: LFALO2726
$12,995.00
$9,995.00
$9,995.00
On Sale
Unavailable
per item
A stunning, original oil on canvas painting by French artist Antoine Gadan. The scene, painted in 1884 and signed in the lower left 'A. Gadan Bône 1884,' features the result of a successful day's hunt. Reminiscent of the work of Jean Baptiste Oudry, this impressive still life of game depicts several hunting trophies and is set into a handsome giltwood frame. Many such paintings create a heightened sense of reality with full-scale representations of the objects they portray, as in the life-sized animals here. Making an incredibly strong and regal statement, this painting would complement any wall beautifully. The kill includes a wild hare as well as a variety of game birds and fish.

Antoine Gadan (1854-1934) was born in France in 1854, and was an entirely self-taught painter. He traveled to Algiers in 1881 at the age of 27, and lived in a residence owned by The Count of Sonis near Bône (Annaba) where he painted the local countryside, gaining quite a reputation as a painter of Orientalist scenes. The beautiful and poetic landscapes he painted earned him the name 'Painter of Grass.' His warm and evocative paintings accentuate the sumptuousness of the Algerian countryside. A hero to Bône, Gadan exhibited at the Exposition Universelle in 1900 and was awarded the Vermeil des mains de Rochegrosse medal for his paintings, which were shown to great acclaim in London and New York. He decorated the Algerian Pavilion at the World's Fair at the Trocadero, again with great success. His works have been exhibited worldwide, including museums in Luxembourg, Algiers, Constantinople, and others.

The oil paintings of Antoine Gadan have often been sold by leading auction houses of the world, including Christie's in New York and Paris and Sotheby's in London and Paris. Private galleries in New York, California, England, Europe and the Mid East have also offered the paintings of Antoine Gadan at quite high premiums in recent times.
Dimensions:
h - 33" framed
w - 42.5"
d - 1"
​Frame is 2" wide