OUR LATEST CONTAINER SHIPPED MAY 6TH 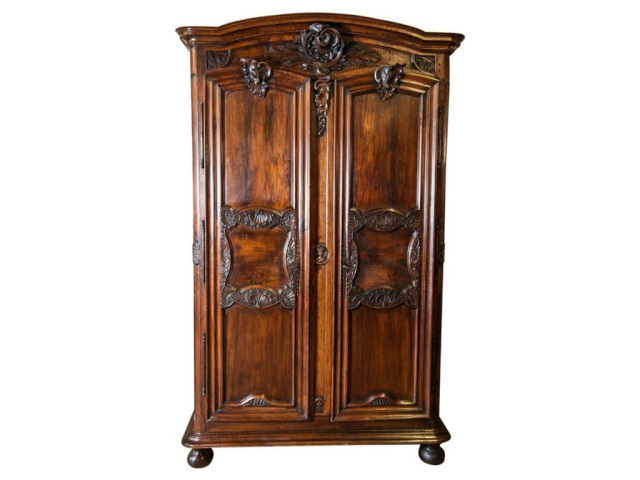 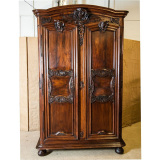 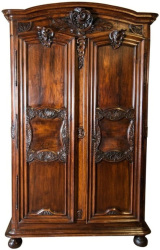 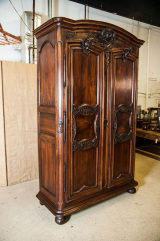 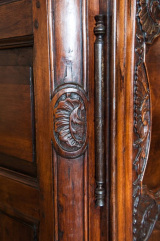 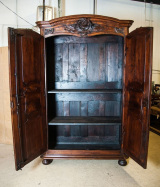 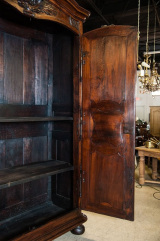 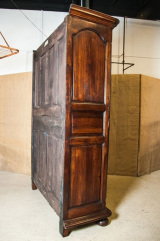 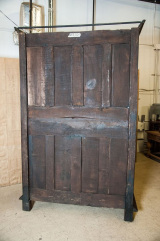 Monumental solid walnut Louis XV chateau armoire having a chapeau de gendarme crown atop an intricately hand carved frieze adorned with beautifully carved rocaille cartouches and foliate. The large doors feature elaborately carved center medallions and open to reveal two interior shelves. Raised on bun feet. This monumental provincial armoire has a rich patina and is a fine example from the Lyon region of France, renown in the 1700s for its superior production of armoires.

Rare, Louis XV period armoires such as this are the epitome of French Provincial furniture. They are increasingly difficult to find in this condition, especially with their original hardware, for it was often removed and melted down for ammunition during the unrest of the late 18th and early 19th centuries.

The first armoires appeared in France during the latter half of the 16th century and were originally designed to store arms or armor. Most often the prominent feature of the home, these large cupboards were later used to hold a family's belongings – from linens to clothing to silver and even food. Cabinetmakers drew their inspiration from the cupboards of Italy, Germany, and Spain, but by the reign of Louis XV, the French armoire had reached its height of popularity and possessed a distinctly French flair.

One of the most significant features of fine Provincial armoires are the locks and hinges. Because these cupboards were a very important part of the household, little expense was spared in outfitting them with the finest hardware. Long ornate hinges, elaborately scrolled escutcheons and even the keys with intricate scrolling designs were an integral part of the overall design of the armoire. Often, the hinges, lock, and key cost more to produce than the armoire itself.

The expense of such a grand armoire was enormous and it often served as an indication of a family's wealth and social standing. As their wealth and possessions grew, armoires were added to the household and it was not unusual for a rather wealthy family to have several armoires, though most certainly not all of them were the high caliber and size of this fine example. It is also interesting to note that most French Provincial armoires were crafted of oak since it was a readily available resource. Walnut armoires such as this, of an exceptional size, were much less common and generally reserved for the very wealthiest families. Today, they are considered the finest examples of the period. As styles changed, the armoire evolved into a smaller, more reserved cupboard, making these massive creations all the more important.